FINANCE MINISTER KASAIJA MEETS TO MEMBERS OF THE OVERSIGHT COMMITTEES OF PARLIAMENT IN MBALE 3rd June, 2019 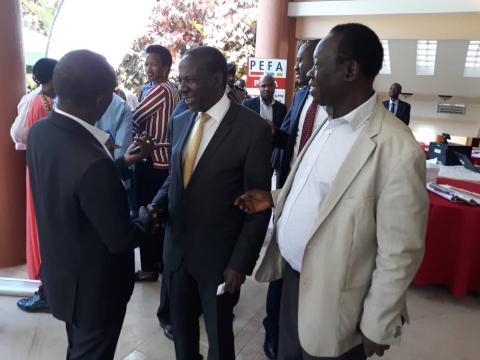 The Minister of Finance Planning and Economic Development Matia Kasaija has said that financial resource availability and its subsequent proper management shapes many of the outcomes which matter in Uganda including effective public service delivery.

The Minister made the remarks while addressing members of the oversight committees of Parliament during an awareness workshop on public financial management (PFM) at Mbale Resort hotel on Thursday.

Kasaija said his Ministry was pleased to be collaborating with Parliament on Public financial management which is an engine for economic growth and achievement of sustainable development goals.

“Public financial management systems are therefore geared towards ensuring efficiency, transparency and accountability in the management of public resources,” said the Finance Minister.

He also noted that the economy in Uganda has been stable over the last two decades and it is expanding.

“Economic growth for this FY 2018/19 is projected at 6.3% and will move up to about 7% in the medium term as the dividends from infrastructure investments and associated commercialization in agriculture and petroleum sectors become realized,” said Kasaija.

The Accountant General, Lawrence Semakula said government of Uganda has achieved significant progress in the implementation of wide ranging financial management reforms over the past two decades.

Some of the key reforms undertaken to improve efficiency and effectiveness of public expenditure management include automation of financial management processes (IFMS), the electronic fund transfer (EFT) and Treasury single Account.

FINANCE MINISTER KASAIJA SPEAKS ON PRUDENT USE OF PUBLIC RESOURCES.pdf