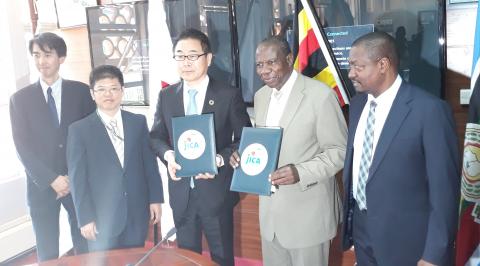 The Minister of Finance Matia Kasaija has signed the exchange of notes and grant agreement worth 2.9 billion shillings for the detailed design of the project to improve traffic control in Kampala city between the Government of Uganda and the Government of Japan. Japan International Cooperation Agency (JICA) Executive Senior Vice President, Kazuhiko Koshikawa signed on behalf of the Government of Japan. Signing the agreement on Tuesday in Kampala, Kasaija said the project for the improvement of traffic control in Kampala city aims at ensuring smooth and stable traffic flow in the capital city through construction of the traffic control center and improvement of 30 critical junctions with signalized intersections. “The project is very timely because it directly addresses the heavy traffic congestion occurring in the downtown Kampala which is one of the biggest challenges for sustainable urban development,” said Kasaija. He said the main component of the project has already been agreed upon between the two governments and a grant agreement is expected to be signed by the end of the year 2019. JICA Executive Senior Vice President, said the traffic control centre will be the first of its kind in East Africa, adding that they expect Kampala to become the leading city in the area of traffic control. “At least 4 million people in Uganda will benefit from this project. The project will reduce severe congestion which is one of the urgent issues the city has laid out in the second National Development Plan,” Kazuhiko said. The project is to be implemented in partnership with Kampala Capital City Authority (KCCA). The Acting Executive Director, KCCA, Andrew Kitaka, thanked the Government of Japan for the grant to improve traffic flow in the city. The 30 junctions include Mulago Round about, Wandegeya, Rwenzori Courts, Station Road, Entebbe Road, Grand Imperial and Nasser road. Others junctions are Spear Motors,Nakawa,UMEME headquarters,Kubiri,Equatorial/Kyaggwe road, Nigeria Embassy/Nakasero road and Kyaggwe road/Buganda road.