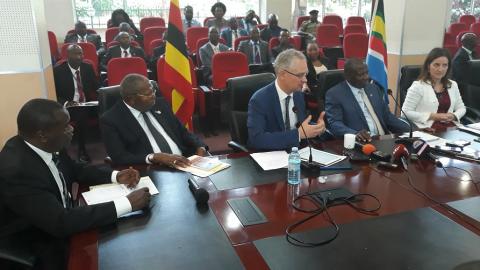 The remarks were made by the IMF division chief African department Alex Schimmelpfennig in Kampala on Tuesday, while meeting Officials from the Ministry of Finance, Bank Of Uganda (BOU), Uganda Revenue Authority (URA) and Uganda Bureau of Statistics (UBOS).

The IMF chief however, cautioned Government to go slow on borrowing considering that the ratio of the public debt to the GDP is likely to rise beyond the current level of 41.5% of GDP. He advised Government to look for concessional loans (low interest finance) and also balance investment in people and infrastructure.

The IMF team has been in the country assessing Government expenditure, independence and effectiveness of Bank of Uganda and the financial sectors contribution to the economy.

“The main challenge we see for Uganda going forward is to ensure that economic policies translate into inclusive growth; inclusive growth means that everybody benefits from the growth and that the economy is creating jobs,” said the IMF Chief. Schimmelpfennig also applauded Bank of Uganda for maintaining the Central Bank rate at 10% for the month of February 2019. He also said Uganda’s reserves worth $3.2 billion are good enough to cover four months of imports.

On job creation, the IMF chief tasked Government and the Private sector to create at least 600,000 jobs per year for inclusive growth.

The Minister of Finance, Matia Kasaija said Uganda’s economy will continue to grow because all things that make the economy grow are taking shape, citing investments in power, and other infrastructure such as roads, Airport, health and education.

“The cost of money is still an issue because interest rates are relatively high for particularly small business people,” the Minister said adding that Government is strengthening the Microfinance support Centre to lower the cost of credit.

He also called for peace and stability in the country, urging people to resolve conflicts in a civilized manner and also desist from engaging in criminal activities.