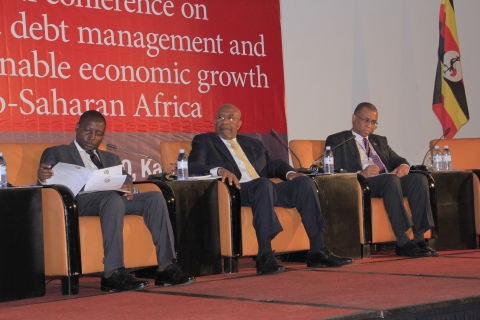 Senior government officials from across sub-Saharan Africa and a wide range of debt management experts and stakeholders met from the 26th until the 28th of February 2020 in Kampala to discuss recent public debt developments and untangle the complexity they are faced with regarding sovereign borrowing.

The conference provided a unique opportunity for the borrowing countries to discuss, in a closed-door setting, ways to more prudently contract and manage debt in an increasingly complex and volatile financing landscape.

The conference was a resounding success. Around 150 participants from 19 sub-Sahara African countries, international organizations like the IMF, World Bank and United Nations, acclaimed universities and research centres, regional collaboration institutes, as well as commercial creditors attended the conference.

The Conference was opened by the Prime Minister Dr Ruhakana Rugunda who said the reason for rising debt burden can be attributed to an increasing level of investment requirements in sub-Saharan Africa, adding that in order to improve productivity and growth, countries need to invest in infrastructure.

“Countries where peace and stability are flourishing are attractive places to lend to. As countries move away from conflict, they may also experience more borrowing options,” said the Premier.

He said almost 40% of countries in Sub-Saharan Africa are in debt distress or have a high risk of it. The IMF’s records show the average level of total debt for Sub-Saharan African countries had risen to 55% of GDP in 2016 compared to 35% in the early 2010’s.

Rugunda said, debt in itself may not be a problem if it is incurred for development reasons and at affordable costs, adding that debt challenges and opportunities should be tackled as a region.

He said through sustainable and inclusive economic growth, the region can outgrow its debt burdens and reduce reliance on borrowing, and particularly unfavourable financing options.

The Premier thanked the Dutch Government and specifically the Ministry of Foreign Affairs along with the United Nations Department for Economic and Social Affairs for the support rendered to the government of Uganda in preparing this conference.

Earlier on, the Minister of State for Planning David Bahati said whereas Uganda has shown a strong appetite for debt – it faces no difficulty in repaying the debt.

He said over the past decade, the Government of Uganda has borrowed extensively to finance the country’s infrastructure demands, adding that the debt-to-GDP position increased from 19.2 percent in 2009 to 36.1 percent in 2019.

Bahati said 59% of our borrowing is still on concessional terms with multilateral institutions and development banks.

“Our engagement with bilateral and commercial partners is to finance specific projects that are of high returns and directed towards growth drivers and export promotion,” said Bahati.

According to the Permanent Secretary/ Secretary to the Treasury, Keith Muhakanizi, as debt levels reach sustainability ceilings in various countries in the region, it is imperative that debt is used and managed well.

He said Finance ministries, and debt managers in particular, have an important and challenging role to play.

The keynote speaker, Elliot Harris the Assistant Secretary General for Economic Development and Chief Economist Department of Economic and Social Affairs at the United Nations also rallied sub-Saharan Africa countries to focus on increase their tax to GDP ratio and also allow the private sector to thrive and take lead in investments.

The Conference was closed by the Minister of Finance, Matia Kasaija who said the complex debt issues can be addressed if countries improve on debt management practices and also equip themselves with the necessary skills and preparation to negotiate with potential creditors on equal footing.

“I believe we have all agreed on the need to enhance our capacity to negotiate for better terms and conditions during the loan acquisition process,” said Kasaija.